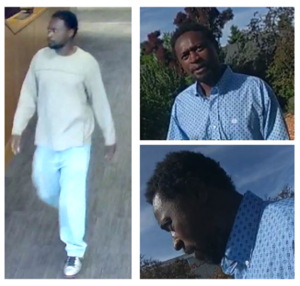 SAFETY ALERT UPDATE—On Thursday, June 16, Anietie Umoren was released from the Salt Lake County Jail. Umoren, 40, a registered sex offender, has been banned from the University of Utah campus. Any member of the community who sees Umoren on campus should call University Police at 801-585-2677.

On Thursday, June 9, at 8:58 a.m., the University of Utah Police Department arrested Anietie Umoren, 40, for stalking and trespassing after two women reported him aggressively following and harassing them at the Marriott Library. Responding to these concerns, University Police also learned that Umoren had outstanding warrants for his arrest. University Police transported him to the Salt Lake County Jail, where he remains in custody.

Umoren is a registered sex offender. The warrants for his arrest stem from his refusal to comply with Utah’s sex offender law. He is using different names and not disclosing his age. The victims reported seeing and interacting with him multiple times on campus, including in the Union Building and the University Store, starting on May 31.

The university has issued a no trespass directive and permanent "campus ban" to Umoren barring him from returning to campus. Any member of the community who sees Umoren on campus should call University Police at 801-585-2677.

This safety warning is being issued as part of the University of Utah’s efforts to provide helpful information about potential threats to the campus community. While it may be distressing to learn about this incident, it is being shared so you can best protect yourself. Responsibility for a crime lies with the person committing it; however, there are some things you can do to reduce your risk of experiencing crime.